With its wealth of free-to-enter museums, big-name galleries and world-famous sights, central London’s main attractions can get pretty packed with tourists. Fortunately, locals are well versed in how to appreciate the British capital’s treasures without having to wedge in behind hordes of onlookers or climb up onto a bench to see over them. Here’s when to visit to avoid the crowds… The early bird really does catch the worm at St Paul’s. Set your alarm and arrive as the doors open at 7.30am for the morning prayer. By the time the cathedral starts filling up with tourists at 8.30am, you’ll have already absorbed its beguiling ambiance. When the galleries open an hour later, make a beeline for the 257 steps up to the Whispering Gallery around the interior of the dome. A soft word spoken against the wall will be audible on the opposite side—something you can adequately appreciate in peace and quiet. It’s best to skip St Paul’s during the daytime, especially in summer, when a queue of tourists often snakes around the exterior. At over 1,000 years old, Borough Market is understandably a major foodie attraction in central London. Open Monday to Saturday with aromatic stalls offering everything from posh toasted cheese sandwiches to hog roasts, its laid-back vibe and tempting produce invites tourists to linger. Steer clear of the market on Saturdays—it’s gridlock—and it’s not so fun on weekdays at lunchtime either, when locals in the surrounding offices flock here for their lunch, adding to the tourist hordes. Go in the morning as the stalls start setting up at 10am or in the afternoon, well before closing hours at 5pm. The 80,000 precious artefacts on display in the British Museum are only a small proportion of the eight million objects in its possession, and they’re all absolutely worth seeing. Arrive as the museum opens at 10am and, unless you want to squint at a distant speck that is the Rosetta Stone over a horizon of onlookers, make the Egyptian and Assyrian galleries your first port of call. These rooms tend to fill up first and fast. Steer clear of the museum at midday and on weekends. Michelangelo, da Vinci, Renoir and Van Gogh are just a few of the big names under The National Gallery’s grand roof, making it one of central London’s main attractions—and don’t the annual six million visitors know it! Weekday mornings and Friday evenings, when the gallery is open late, are the best times to beat the crowds. Be sure to step into Gallery A, a tranquil trove of medieval masterpieces that only opens on Wednesdays. Still too busy? Step around the side to the National Portrait Gallery, whose portraits of Shakespeare and Queen Elizabeth II (courtesy of Andy Warhol) make this a worthwhile stop. With its free entry and tonnes of child-friendly exhibits containing some 80 million specimens, the gracious Gothic Revival building that houses the Natural History Museum has a deep gravitational pull for every family with young children during weekends and school holidays. It’s also overrun with organised school trips during most weekday mornings, and you can ditch your dreams of snapping a dinosaur selfie at these times. Afternoons, however, are blissfully tranquil and you can wander through the wildlife garden and taxidermy displays at your leisure. We’re all about the small details that make a big difference to your family. Whether its well-equipped media rooms for your whole brood to gather in, dedicated kids’ play areas or shelves of storytime books, our London holiday homes have those little extras to make your stay unforgettable... 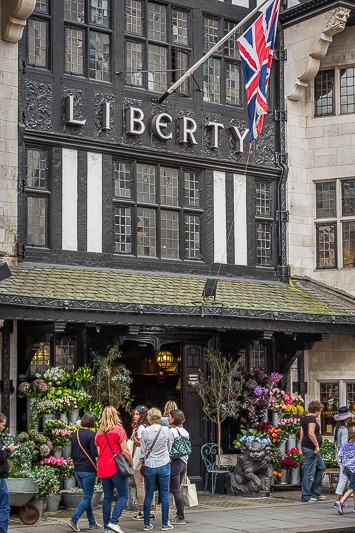 Whether you are looking to spend big or simply browse through and admire London's most luxurious shops, our city truly is a paradise for luxury shoppers! This is a city that will never rest on its laurels, with internationally renowned architects continuing to dream up ever more impressive edifices across the London skyline. From soaring skyscrapers to giant slides, here are our favourite modern architectural landmarks to see in London. Sightseeing The Best (and Worst!) Times to ...

Locals are well versed in how to appreciate central London’s attractions without having to wedge in behind hordes of onlookers or climb up onto a bench to see over them. Here’s when to visit to avoid the crowds…